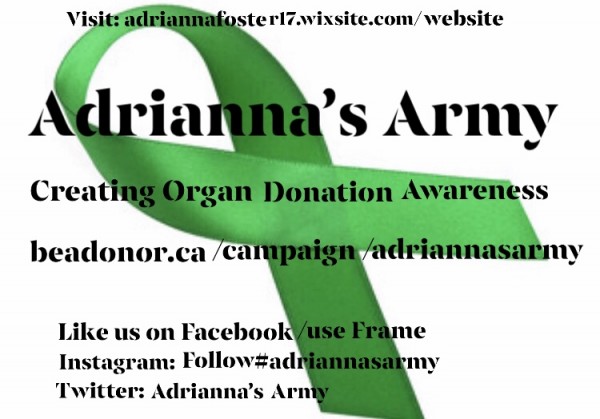 Brandy Varcoe and Her family from Perth, Ontario came up with “Adrianna’s Army”. It first started out with a Gofund Me Page. (which is now SHUT DOWN, we have tried to shut the link down and somehow it keeps getting re-opened, we CAN NOT access it so please do not use the link! We truly appreciate the support but it is un-accessible). Everyone was in shock when Adrianna became sick. The Varcoe's took action! They then did Vehicle Stickers! To raise money for Adrianna . After coming home 6 and a half weeks later Adrianna changed the focus. She didn’t want the pity and sadness. She wanted to make sure something good could come from the hell that she was placed with. She knew she wanted Adrianna’s Army to help not just her but others in the same position as herself! Brandy first came to Adrianna with a Sweater! When Adrianna started to feel better she went to Blade Sports in Carleton Place, came up with a design and went for it! We started T-shirts & Ball Caps, then I found a website for Wristbands! From then on we started to grow! While waiting Adrianna started to build Adrianna's Army in the event that she would not receive her heart as she became weaker in her wait. It could be something carried out in her memory by family and friends. April 8th 2019 Adrianna received her 2nd Heart Transplant. While recovering she promotes the importance of Organ Donation With Adrianna's Army. You can Like our Facebook Page to follow the Army's Journey! Also Check out Adrianna's Interview with CTV News-Ottawa-Joel Haslam! Every three days someone dies in Ontario because the life-saving organ transplant they need is not available, yet just over 30% of Ontarians have registered their consent to be a donor. It's really surprising, and it's not good enough. Especially for the over 1,500 people in our province waiting for organ transplants and the thousands more waiting for tissue transplants. Our organization is committed to doing our part. We're asking every member of our organization to register their consent for organ and tissue donation – it can be done online in just two minutes, and you can do it right from this page. We're also asking them to ask their friends and family to register as well. Registering to be a donor might be the greatest gift you ever give. If you'd hope a live-saving transplant would be available for your friends and loved ones, please register today.