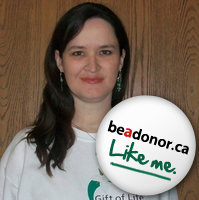 I was diagnosed with kidney disease when I was just a child. Being my mom's first child she blamed herself as I was sick since birth but it wasn't discovered until I was 9. It wasn't her fault. I was just born with a urinary reflux that was not caught in time. I ended up with both kidneys so infected that they had to be removed and got my first kidney transplant in my teens. That gave a little over a decade of normal health and I went out and made friends and learned a lot about being myself and what is important in life.

A kidney extended my life

Years later I ended up back on dialysis for a number of years but finally got another kidney transplant from an elderly man. Both of these transplants I had gotten in my life were due to those Canadians who had signed to be an organ donor after they are gone and no longer need their organs. If it wasn't for them I would have been waiting even longer for a kidney. I have seen many pass away while waiting for a transplant and appreciate just how much of a gift of life this really is.